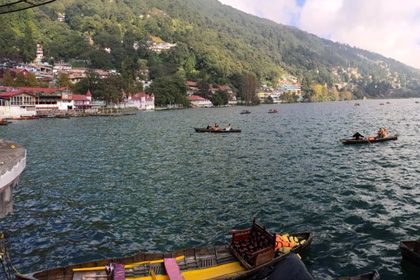 Naini lake,Nainital lake situated in Nainital is a one of the major attraction and preferred spot among the tourists.Known for boating and sailing, it is approximately 2 miles long and 27 m depth. Surrounded by Naina peak and forested snow view peaks hills, shape of Nainital lake looks like eye-shaped lake in the middle of the town.

This lake was found during British period in 1839 by Mr. P. Barron, a Britisher who reached their accidentally while hunting and decided to develop a European colony around the lake.It is believed that the lake is blessed with divine power.It is believed that this lake is one of the emerald green eyes of Goddess Sati wife of Lord Shiva fell to earth after she self-immolated herself because of the insult of Lord Shiva by her own father.

Besides Nainital lake is Mall road know as G. B. Pant Marg surrounded by restaurants,market and hotels. In night, lake becomes more beautiful when bright lights near the lake reflected in the glittering blue waters of the lake.

Nainital Lake is one of the four lakes in Kumaon hills of Uttarakhand. the Sattal Lake, the Bhimtal Lake and the Naukuchiyatal Lake are the other lakes in Nainital.

Boating opens at 6.00 Am and closes at 6.00 Pm round the year.People can opt for multiple choices like boating,traditional rowing boats,paddling,yachting and kayaking.Pedal boats are available for Rs 150/per hour and brightly decorated traditional boats could be hired for Rs 200/per hour.